To share your memory on the wall of Aaron Harlan, sign in using one of the following options:

Andy was born at home on April 22, 1928 in Wileyville, WV; son of late William and Nancy (Morris... Read More
Aaron “Andy” L. Harlan, 90, of New Martinsville, WV died peacefully Thursday, April 18, 2019 at his home while surrounded by his family.

Andy was born at home on April 22, 1928 in Wileyville, WV; son of late William and Nancy (Morris) Harlan.

In addition to his parents, he was preceded in death by his wife, Wanda Lemons Harlan in 2018; two brothers, Dan Harlan and Hershel Harlan and two sisters, Renee Lehman and Nancy Postlethwait.

At Andy’s request there will be no services with burial in Northview Cemetery.

To send flowers to the family or plant a tree in memory of Aaron Levi "Andy" Harlan, please visit our Heartfelt Sympathies Store.

We encourage you to share your most beloved memories of Aaron here, so that the family and other loved ones can always see it. You can upload cherished photographs, or share your favorite stories, and can even comment on those shared by others.

Guaranteed hand delivery by a local florist
MY

Posted Apr 19, 2019 at 05:50pm
May the love of God surround you and your family during this difficult time,
May you come to know that the love of God is with you always,

May your memories of Aaron Levi Harlan, give you peace, comfort and strength…

Rest now in the arms of our Lord your mission on earth is complete.
I thank you for your service to the communties. You will not be forgotten.
My thoughts
and prayers to the family of …. 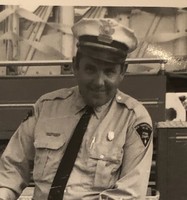