To share your memory on the wall of Faith Blake, sign in using one of the following options:

Faith was born June 25, 1932 in Wetzel County, WV; daughter of the late Daniel and Sylvia May (Hoskins) Mack.

Faith was born June 25, 1932 in Wetzel County, WV; daughter of the late Daniel and Sylvia May (Hoskins) Mack.

She retired from Wetzel County Hospital as an EKG Tech. She loved to do crafts and craft shows, a member of the Trillium Garden Club for many years and Red Hat Society.

In addition to her parents she was preceded in death by her husband, Albert Blake and sister, Janet Uselton.

To send flowers to the family or plant a tree in memory of Faith I. Blake (Mack), please visit our Heartfelt Sympathies Store.

We encourage you to share your most beloved memories of Faith here, so that the family and other loved ones can always see it. You can upload cherished photographs, or share your favorite stories, and can even comment on those shared by others.

Flowers were purchased for the family of Faith Blake. Send Flowers 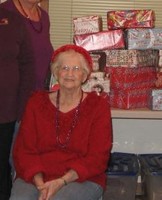