To share your memory on the wall of Charles Scott, sign in using one of the following options:


In addition to his parents, he was preceded in death by his wife, Grace (Winland) Scott in 2016; son, Timothy Scott; Granddaughter Linda Bagenstos and seven siblings, Denzel, Melvin, Jack, Bonnie, Virginia, Betty and Marge.

To send flowers to the family or plant a tree in memory of Charles E. "Chuck" Scott, please visit our Heartfelt Sympathies Store.

We encourage you to share your most beloved memories of Charles here, so that the family and other loved ones can always see it. You can upload cherished photographs, or share your favorite stories, and can even comment on those shared by others.

Posted May 03, 2019 at 10:42pm
To my godfather, uncle Chuck always such a kind loving person.. Keeping my cousins Linda, Charlene and David in my thoughts and prayers at this
most difficult time. May you rest in peace uncle Chuck.
Comment Share
Share via:
L

Posted May 03, 2019 at 08:54pm
Daddy I Iove you. I am missing our phone calls. It has been so hard without you here. I feel so empty losing my father. I know your granddaughter Linda and all your loved ones were there to greet you at the gates to heaven. Rest in peace daddy I love you.
Comment Share
Share via:
HK

Posted May 02, 2019 at 01:12pm
It hurts to think that you are gone. You were an amazing man who has touched many hearts.I wish my little family was able to see you again. Just know that you are loved by me grandpa. We will never let the memories with you fade. I wish I could be there with the family to mourn your loss.
Comment Share
Share via:
L

Posted May 01, 2019 at 03:13pm
We love you and miss you already.Our lives will not be the same without you.Just know you are always loved and forever missed. With love from your daughter Linda and grandchildren. 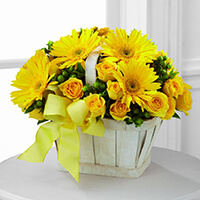 Linda,Heather,Haley,Brooke,Dominik,Kennedy,Miles purchased the The FTD Uplifting Moments Bouquet for the family of Charles Scott. Send Flowers

Posted May 01, 2019 at 08:32am
So sorry to hear about your Dad. I waited on Chuck and Grace all the time at the bank and was always so kind and loving.
You will be in our thoughts and prayers.
Nancy & Chuck Saltz
Comment Share
Share via: