To share your memory on the wall of Randy Vanness, sign in using one of the following options:

Print
Randy Lynn Vanness, 52, of New Martinsville, WV died unexpectedly on Monday, May 27, 2019 at his home.

Randy was born February 18, 1967 in Barnesville, OH; son of Wilma Glendenning of Sistersville, WV and the late Ralph Vanness.

Randy was born February 18, 1967 in Barnesville, OH; son of Wilma Glendenning of Sistersville, WV and the late Ralph Vanness.

He was a graduate of Beallsville High School Class of 1986; he loved fishing and hunting and he was a Protestant by faith.

In addition to his father, he was preceded in death by his grandparents, three infant siblings, Ronnie, Connie and Darlene and step-father, Glenn Glendenning.

Surviving in addition to his mother are his daughter, Harley (Gabriel) May of Powhatan Point, OH; two sisters, Carol (Terry) Winter of Paden City, WV and Sharon Vanness of Sardis, OH; three grandchildren, Nicole, Vanessa and Jonah and several nieces, nephews and cousins.

To send flowers to the family or plant a tree in memory of Randy Lynn Vanness, please visit our Heartfelt Sympathies Store.

We encourage you to share your most beloved memories of Randy here, so that the family and other loved ones can always see it. You can upload cherished photographs, or share your favorite stories, and can even comment on those shared by others.

Posted May 30, 2019 at 02:41pm
Randy you will be missed and I know at least your not in pain or feeling like no one missed or loved you. We know you are in heaven . And. We will meet again. Your daughter and grandkids will always miss you .
Comment Share
Share via:
HS

Gracious Lavender Basket was purchased for the family of Randy Vanness. Send Flowers 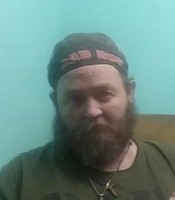