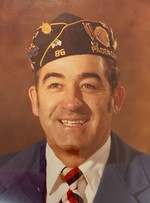 He was a retired field engineer for St. Regis and was a retired operator for PPG; loved gardening and playing golf; a U.S. Marine serving during WWII; member of Sistersville VFW Post 6327, American Legion Post No. 86 and New Martinsville Moose Lodge #931; served with the Honor Guard “Blue Blazers” for thirty years and a Protestant by faith.