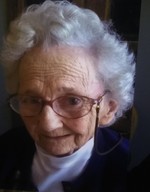 She was a homemaker and a self-employed caregiver, member of the Sistersville VFW Auxiliary, Sistersville American Legion Auxiliary Unit 67 and Paden City Fraternal Order of the Eagles Aerie #2281 Auxiliary and member of St. Paul United Methodist Church in Paden City.

In addition to her parents, she was preceded in death by her husband, Graffics Lee McDougal and daughter, Judith A. Dix.

Auxiliary services will be conducted at 6 p.m. on Thursday.