To share your memory on the wall of Audra Powell, sign in using one of the following options:

Provide comfort for the family of Audra Powell with a meaningful gesture of sympathy.

Audra was born October 22, 1925 in Proctor, WV; daughter of the late Frederick and Rosa (Davis) Stackhouse.

Audra was born October 22, 1925 in Proctor, WV; daughter of the late Frederick and Rosa (Davis) Stackhouse.

She was a retired from a company that made book matches, a homemaker and she was a Christian.

In addition to her parents, she was preceded in death by her husband, Wm Ralph Powell; five brothers, Donald, Marian, Bobby, Dick and Charles and five sisters, Mary, Reva, Edna, Toots and Susie.

We encourage you to share your most beloved memories of Audra here, so that the family and other loved ones can always see it. You can upload cherished photographs, or share your favorite stories, and can even comment on those shared by others. 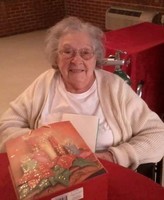