To share your memory on the wall of Larry Mall, sign in using one of the following options:

He was retired crane man and safety chairman for the former Ormet Corp., a veteran for the U.S. Air Force serving during the Korean Conflict; member of New Martinsville Moose Lodge #931, loved camping on Middle Isle and member of St. Vincent De Paul Catholic Church.

In addition to his parents, he was preceded in death by a brother, Pursey Mall; sister, Nancy Haught and her husband Gayle.

To send flowers to the family or plant a tree in memory of Larry Herbert Mall, please visit our Heartfelt Sympathies Store.

We encourage you to share your most beloved memories of Larry here, so that the family and other loved ones can always see it. You can upload cherished photographs, or share your favorite stories, and can even comment on those shared by others.

Posted Sep 26, 2019 at 04:34am
May the love of God surround you and your family during this difficult time,
May you come to know that the love of God is with you always,

May your memories of Larry Herbert Mall, give you peace, comfort and strength… 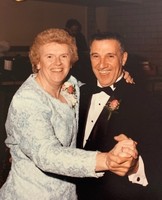