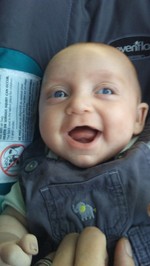 Cayson Allech Rosenberger, 6 months, of New Martinsville, WV was tearfully given back to Jesus on Thursday, September 26, 2019.

He was a happy baby that enjoyed playing with his brother; receiving and giving love and attention from his family.

He was preceded in death by his grandma Lavaughn Leek and brother, Zachariah Rosenberger.

Burial to follow in Northview Cemetery in New Martinsville, WV.

Cayson’s service will be paid for by the Zachary Taylor Trust Fund. The family would like for you to help replenish this fund, that covers the funeral cost of children, by giving to the funeral home or stop by any WesBanco Bank and make your anonymous donation. Cayson will be the tenth child helped by this fund.