To share your memory on the wall of June Somerick, sign in using one of the following options:

June was born July 20, 1942 in Harrisburg, PA; daughter of the late Robert and Mary (Pickle) Schnee.

June was born July 20, 1942 in Harrisburg, PA; daughter of the late Robert and Mary (Pickle) Schnee.

Interment to be held at the convenience of the family in Ohio Western Reserve National Cemetery in Rittman, OH.

A special thanks to Larry Felger, a close friend and neighbor for assisting her with chores and driving for the past for years.

We encourage you to share your most beloved memories of June here, so that the family and other loved ones can always see it. You can upload cherished photographs, or share your favorite stories, and can even comment on those shared by others.

Posted Dec 11, 2019 at 04:27am
I remember 3 year's ago i had surgery and she and i would call each other and talk untill i feel asleep. I love u Aunt june i will miss u and i will always remember u.
Comment Share
Share via:
LB

Posted Dec 11, 2019 at 01:08am
Too my loving aunt june who would always talk too from 11:30pm till midnight i will miss u and love u always and feel grateful too be your nice LKB

Leslie kae Baldwin purchased flowers and planted a memorial tree for the family of June Somerick.

Posted Dec 10, 2019 at 04:57pm
So sorry to hear of the loss of a great women. She and Dick loved little ones and knew how to love and take care of them QVC lost a good customer, that was alway a joke with me. Bless all family members.
Comment Share
Share via:
DS

Posted Dec 10, 2019 at 12:31am
Sorry to hear about the passing of June. Always enjoyed her smile when she came into Choo Choos. She will be missed. R.I.P my friend. Prayers to her family. Donna.
Comment Share
Share via:
JB

Posted Dec 09, 2019 at 10:40pm
when I tried to lie about taking my nap Aunt June saw right through my ruse. well darn it! I showed her. I marched right back up to the bedroom and went to sleep... rest in heaven... Jim
Comment Share
Share via: 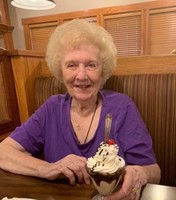