To share your memory on the wall of Robert "Bob" Pyles, sign in using one of the following options:

Print
Robert “Bob” John Pyles, 62, of New Martinsville, WV died as the result of a house fire on Saturday, January 11, 2020 with his canine friend, Po Po.

He was a retired laborer for West Lake, enjoyed fishing and loved riding his Harley.

Burial to be held at the convenience of the family.

We encourage you to share your most beloved memories of Robert "Bob" here, so that the family and other loved ones can always see it. You can upload cherished photographs, or share your favorite stories, and can even comment on those shared by others.

Posted Jan 17, 2020 at 08:32am
Lacy, May the memories with your Dad provide you with strength and comfort. Sending our love.

Posted Jan 15, 2020 at 05:12pm
So sorry. Bob was one of the good guys and will always be remembered with a smile. Prayers for family and friends left behind.
Comment Share
Share via:
BT 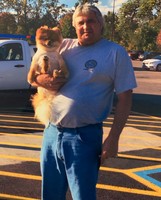