To share your memory on the wall of Justin Wade, sign in using one of the following options:

Provide comfort for the family of Justin Wade with a meaningful gesture of sympathy.

Print
Justin M. Wade, 33, of New Martinsville, WV died Sunday, February 9, 2020 at his home while surrounded by his family.

Justin was born September 6, 1986 in New Martinsville, WV; son of Andrea (Morgan) Wade of Reader, WV and the late Larry... Read More
Justin M. Wade, 33, of New Martinsville, WV died Sunday, February 9, 2020 at his home while surrounded by his family.

He was a heavy equipment operator for IUOE Local 18, loved working and hunting, graduated Valley High School Class of 2005 and a Christian by faith.

In addition to his father, he was preceded in death by his sister, Anna Lea Wade and mother-in-law, Carolyn Gatian.

We encourage you to share your most beloved memories of Justin here, so that the family and other loved ones can always see it. You can upload cherished photographs, or share your favorite stories, and can even comment on those shared by others.

Posted Feb 13, 2020 at 08:56am
Sorry for the loss of not only a good friend but also someone who was like a brother to you . Send to the home of Jimmy Yoho. Love Linda Winkler

Flowers were purchased and a memorial tree planted for the family of Justin Wade. Send Flowers

Flowers were purchased and a memorial tree planted for the family of Justin Wade. Send Flowers

Posted Feb 11, 2020 at 09:57am
With deepest sympathy. Delrick Corporation, Rick and Della Gay Compton and family

Posted Feb 11, 2020 at 09:49am
Dear Carli and family,
May God Bless you and keep you in this great time of need. My thoughts and prayers go out to all of you.
Comment Share
Share via: 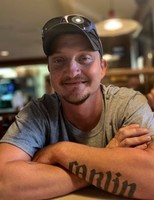