To share your memory on the wall of Patty Sebar, sign in using one of the following options:

In addition to her mother, she was preceded in death by her loving husband, George “Sonny” Sebar; daughter, Teresa Sebar; grandson, Matt Sebar; and sister, Mary Talbot.

To send flowers to the family or plant a tree in memory of Patty Sue Sebar (King), please visit our Heartfelt Sympathies Store.

We encourage you to share your most beloved memories of Patty here, so that the family and other loved ones can always see it. You can upload cherished photographs, or share your favorite stories, and can even comment on those shared by others.

Posted Mar 10, 2020 at 09:30pm
My heart is breaking. Pat and Sonny Sebar left me with many wonderful memories of my youth and even years later we would run into each other and still find wonderful things to talk and laugh about. My sympathies to the entire Sebar family I will never forget their visits to Florida or dancing at the Legion but now she is at peace with the love of her life Sonny and her Terri.
Comment Share
Share via:
JP

Posted Mar 10, 2020 at 11:05am
Our thoughts and prayers are with you all. Love from Betty Yoho, Sandy and Norman Hardman and Toby May

Flowers were purchased for the family of Patty Sebar. Send Flowers

Flowers were purchased for the family of Patty Sebar. Send Flowers 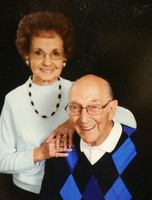