To share your memory on the wall of Mary Cross, sign in using one of the following options:

She was a homemaker; loved reading, shopping, going to the beach and playing with her grandchildren and member of Bridge Street Church of Christ.

In addition to her parents, she was preceded in death by her brother, John Anderson.

At Mary Jo’s request private services will be held at the convenience of the family. Arrangements entrusted to Jarvis-Williams Funeral Home in Paden City.

Memorial contributions may be made, in Mary Jo’s name, to either the Bridge Street Church of Christ, PO Box 292, New Martinsville, WV 26155 or charity of donor’s choice.
Read Less

There are no events scheduled. You can still show your support by sending flowers directly to the family, or planting a memorial tree in memory of Mary Jo Cross (Anderson).
Plant a Tree

Posted Mar 18, 2020 at 06:43pm
I was crushed to hear about Mary Jo’s passing! I am so sorry, and all my thoughts and prayers are with her family right now. I still very much have the feeling that you all are my neighbors, even though miles and years have separated us. My love to you all!!
Comment Share
Share via:
DH

Posted Mar 18, 2020 at 08:04am
Susan and family, I have so many wonderful memories of your mom, from spending the night when we were younger, her taking Mikey to church with her and the yard sale when the gazebo was coming down the street and you thought she bought it from QVC. I still laugh when I think of that day! I feel so blessed to have known such a special lady! Thoughts and prayers are with you all now and always!
Comment Share
Share via:

Posted Mar 17, 2020 at 09:18pm
Lee, Susan, and Rodney and Family,
We are saddened to learn about the passing of Mary Jo. It just seems like yesterday that we were renting the little house across the street from Lee and Mary Jo. Always a happy smile and kind words to share when your path crossed hers around town. Our sincere condolences during this difficult time. May your memories comfort you in the days ahead. Love, Kevin & Sarah Yeater
Comment Share
Share via: 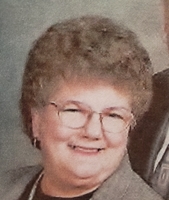