To share your memory on the wall of James "Brad" Long, sign in using one of the following options:

Provide comfort for the family of James "Brad" Long with a meaningful gesture of sympathy.

He was born January 1,1924, at Gamble Run, and was the son of Jacob Montreville Long and Amanda France... Read More
James Bradford “Brad” Long, 96, of Paden City, WV, passed from this life on Wednesday, April 29th, 2020, with family by his side.

He was born January 1,1924, at Gamble Run, and was the son of Jacob Montreville Long and Amanda Frances Cordery Long.

He is survived by many nieces, great nieces, nephews and great nephews and even friends who thought of him affectionately as “Uncle Brad.” He had wonderful friends that helped care for him by preparing meals, doing household chores and providing transportation to church services. Madge Clark, who he shared many days with, Betty Tarcoza and several members of the Paden City Church of Christ. He had many friends at Bob Evans and Choo Choo’s that looked out for him. Hospice of Southern West Virginia assisted the family with great compassion in his final weeks. A special thank you to all.

He was a building contractor by trade. He owned and operated two businesses, Long Brothers Construction and Long Brothers Gas Company along with his brother and sister-in-law, Monzell and Ed Long.

Brad was a member of the Paden City Church of Christ. He loved the community of Paden City and worked on many projects over the years. He was an avid fan of the Paden City Wildcats as well as the West Virginia Mountaineers. He enjoyed woodworking and making furniture with his brother Ed. He continued woodworking after Ed’s passing, making a number of wooden baskets while in his 90’s.

Due to circumstances concerning Covid-19 there will be an outdoor service in the north parking lot of the Paden City Church of Christ with Brian Price officiating. Those attending will be directed by Jarvis-Williams Funeral Home. The service will begin at 1:00 p.m., Saturday, May 2, 2020. Those serving as pallbearers will be Samuel Rich, Alan Rich, Greg Betkijian, Carl Dorr III, Ken Long and Pat Malone.

In lieu of flowers the family request donations be sent to the PCHS Band Patrons, P.O. Box 219, Paden City, WV 26159.

To send flowers to the family or plant a tree in memory of James "Brad" Bradford Long, please visit our Heartfelt Sympathies Store.

We encourage you to share your most beloved memories of James "Brad" here, so that the family and other loved ones can always see it. You can upload cherished photographs, or share your favorite stories, and can even comment on those shared by others.

Posted May 01, 2020 at 11:27pm
I will sure miss you Brad. You are a sweet & kind man. My condolences to your family and friends. May God Bless them in their time of need. We will miss you at Choo Choo's. R.I.P and fly high with the angels. Love You. Donna D. Smith
Comment Share
Share via:
CR

Thank you so much Donna!
PW

Posted May 01, 2020 at 10:28pm
Growing up in a home in Paden City that was built by the Long brothers, Ed and Brad, I had and still have a feeling of pride when looking at their workmanship 64 years later. My Dad, Chuck Crookshanks, always spoke highly of both Ed and Brad and even though I didn’t really know them personally, I feel connected to both of them through our family home where I still live. My deepest sympathies to the many family and friends of Brads. His love, kindness and Christian example will be much missed by all who knew him.

Posted May 01, 2020 at 02:36pm
It has been a pleasure attending church with Brad through the years and more recently having chance meetings at Bob Evans. I will miss seeing him.

Posted May 01, 2020 at 02:32pm
So very sorry for your loss. I have found and wonderful memories of Brad and Ed, and all the family. Prayers for Gods comfort during this sad time.... The Probst family
Comment Share
Share via:
CR

Thank you Probst family! He had fond memories of PeRl and all those on Paden Fork! 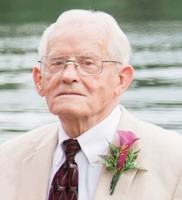