To share your memory on the wall of Danuel Elliott, sign in using one of the following options:

Print
Danuel Lee Elliott, Sr. of Paden City, WV passed away Saturday, May 17, 2020 surrounded by his loving family. He was born April 26, 1936 the son of Rosevelt and Dolly (Swiger) Elliott.

Danuel was retired from Bayer Corporation with thir... Read More
Danuel Lee Elliott, Sr. of Paden City, WV passed away Saturday, May 17, 2020 surrounded by his loving family. He was born April 26, 1936 the son of Rosevelt and Dolly (Swiger) Elliott.

He was extremely patriotic. He loved his fellow Veterans and honored and respected the American flag.

He loved fishing, hunting, gardening, and attending his children’s and grandchildren’s school and sporting activities. He loved the Pittsburgh Pirates and WVU football and basketball. He will be dearly missed by his family.

In addition to his parents, he was preceded in death by his son, Darren Lee Elliott; brothers, Ralph Wayne Elliott and Robert Gary Elliott and sisters, Betty M. Allison and Audra Nolan.

Graveside services will be held at 11 a.m., Wednesday, May 20, 2020 at Greenlawn Memorial Park in New Martinsville, WV.

To send flowers to the family or plant a tree in memory of Danuel Lee Elliott Sr., please visit our Heartfelt Sympathies Store.

We encourage you to share your most beloved memories of Danuel here, so that the family and other loved ones can always see it. You can upload cherished photographs, or share your favorite stories, and can even comment on those shared by others.

Posted May 19, 2020 at 04:15am
May the love of God surround you and your family during this difficult time,
May you come to know that the love of God is with you always,

May your memories of Danuel Lee Elliott, Sr., give you peace, comfort and strength…

Posted May 18, 2020 at 06:35pm
Betsy, so sorry about Dan passing away. I sure you will miss him. Cherish those memories. I'm praying for you God Bless you and all of the family.
Comment Share
Share via:
M

Posted May 18, 2020 at 05:59pm
Betsy, I am so sorry for the passing of your husband Dan. I am glad I got to meet him. If there is anything I can do please call. Marilyn Virden Cotter
Comment Share
Share via: 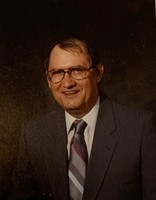