To share your memory on the wall of Alvin Morris, sign in using one of the following options:

He was a retired employee of the former Ormet, a veteran of the U.S. Air Force serving during the Korean War, enjoyed yodeling, telling jokes and going to church, member of the Duffy VFW and American Legion Marne Post #28 and member of the Steelton Church of Christ.

In addition to his parents, he was preceded in death by a son, Carl Morris.

Friends received 2-4 and 6-8 p.m., Tuesday, October 6, 2020 at the Jarvis-Williams Funeral Home in Paden City, where services will be held 11 a.m., Wednesday, October 7, 2020. Burial to follow in Northview Cemetery in New Martinsville with the Honor Guard conducting graveside services.

To send flowers to the family or plant a tree in memory of Alvin Edwin "Eight Ball" Morris, please visit our Heartfelt Sympathies Store.

We encourage you to share your most beloved memories of Alvin here, so that the family and other loved ones can always see it. You can upload cherished photographs, or share your favorite stories, and can even comment on those shared by others.

With Sympathy, Mr. John of Pittsburgh sent flowers to the family of Alvin Edwin "Eight Ball" Morris.
Show you care by sending flowers

Posted Oct 03, 2020 at 08:29am
I dearly liked Alvin, such a funny good man, who lived his country, family and friends. You will be missed by many. RIP Alvin.
Comment Share
Share via:
CM

Posted Oct 03, 2020 at 04:28am
May the love of God surround you and your family during this difficult time,
May you come to know that the love of God is with you always,

May your memories of Alvin Edwin Morris, give you peace, comfort and strength…

With Sympathy, Mr. John of Pittsburgh

Posted Oct 02, 2020 at 02:35pm
Our greatest sympathies for your loss. Our thoughts and prayers are with you and your family during this difficult time.

With Sympathy, Mr. John of Pittsburgh purchased the Peaceful White Lilies Basket for the family of Alvin Morris. Send Flowers

quite a few years ago, we went to Washington, DC, for a pro-life march. We hired a bus and he was of the bunch that went to stand up for pro-life. The bus driver let us out and said he would pick us up, so we got off. When it was time to leave, no Alvin. Our bus driver rode around and we looked for him. After a while, we left D.


C. While driving we found out he got on another bus. We had a flat tire so had to get it fixed. He got home before we did. We didn't get home till almost 4:30am. Enjoyed our trip with him and everyone else.
Comment Share
Share via:
JB

Posted Oct 02, 2020 at 08:06am
I'm gonna be a little long winded here. I remember when I was probably 10, Mom and Dad and I were going somewhere and they had to take something to Uncle Alvin. They decided that they would drop it at the bowling alley where they new he would be. It was a letter or some sort of papers. Well we pull into Bruce Lanes and it's packed. So naturally the folks gave it to me and said "Run in and takes this to Alvin, If you don't see him stop ANYBODY and ask them if they know where 8 ball is" and you can bet sure enough I looked around didn't see him. Stopped someone, asked if they knew where 8 ball was and they said "sure" and took me to him. Now at 10 years old to walk in a place and ask for 8 ball and everyone knew who he was, it couldn't have been a cooler moment for me.

Then years passed and Uncle Alvin and I would bond over our appreciation of music. Whether it was at the Hillbilly Haven shows or really anytime we saw each other. Every time I would come back home to visit I would always stop in McDonalds for breakfast because I knew he would be in there drinkin coffee. Always met with a smile, a handshake, and a "you still writin' songs"

And finally my last memory of seeing Alvin was a couple of years ago in the hospital before Dad passed away. My sister Missy and I were in the room with Dad and she looked up and said "Hey Uncle Alvin" He was walking past the room wearing his signature straw hat. Missy spoke to him and headed out and Alvin, Dad and I sat there. We spoke for a little while and Alvin asked if he could say a prayer and Dad said "of course" He removed his hat and held Dad's hand while giving his prayer. A moment I'll never forget.

Uncle Alvin was a great man and will be missed by us all. I look forward to seeing him again one day with a smile, a handshake, and a "you still writin' songs". My Love to all the family! - John Bungard
Comment Share
Share via: 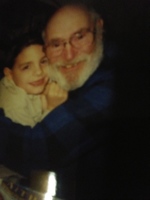 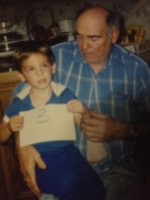 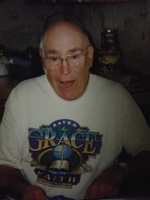