To share your memory on the wall of A. Louise Bauman, sign in using one of the following options:

Provide comfort for the family by sending flowers or planting a tree in memory of A. Louise Bauman

Provide comfort for the family by sending flowers or planting a tree in memory of A. Louise Bauman

She was a homemaker, took art classes at the Community College, member and past president of the Paden City Garden Club, fifty year member of the Eastern Star Chapter 50 and a member of First Christian Church Disciples of Christ where she was very active.

In addition to her parents, she was preceded in death by her husband, John Bauman; sister, Florence Meserole; three brothers, Maruice Robinson, Kenneth Robinson and John Robinson.

Private graveside services will be held at the convenience of the family with Joel A. Potts, III officiating. Burial in Greenlawn Memorial Park in New Martinsville, WV.

Memorial contributions may be made, in Louise’s name, to either the First Christian Church Disciples of Christ or Paden City High School.
Read Less

To send flowers to the family or plant a tree in memory of A. Louise Bauman (Robinson), please visit our Heartfelt Sympathies Store.

We encourage you to share your most beloved memories of A. Louise here, so that the family and other loved ones can always see it. You can upload cherished photographs, or share your favorite stories, and can even comment on those shared by others. 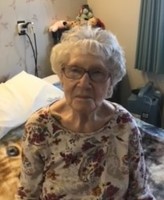