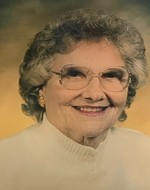 She was a homemaker and a member of Holy Rosary Mission in Sistersville, WV.

At Lena’s request, private services will be held at the convenience of the family with a memorial Mass to be announced at a later time.