To share your memory on the wall of Leo Herrick, sign in using one of the following options:

He attended West Virginia University and was a member of Sigma Phi Epsilon in 1948.
Leo was a veteran of the Korean War, where he earned several medals. He is also past president of the New Martinsville Chamber of Commerce, past president of the New Martinsville Rotary Club and past district governor of Rotary International District 7530. Lifetime member of New Martinsville Moose Lodge #931, Sistersville Elks #333 and American Legion Marne Post #28. Leo was also a lifetime member of Saint Vincent de Paul Catholic church, founder and owner of Wayside Furniture, previous owner of Leo Herrick’s Market.

June 13, 1953 he married the love of his life, Doris Anne Fish, a marriage of 67 years.
They raised 1 girl and 4 boys, Melinda (Ron), Matthew (Kimberly), Mitchell (Tracy), Michael, and Christopher (David). In addition, they have 9 grandchildren and 3 great grandchildren.

Leo had a passion for his camp on Slicker Falls in Tyler County, as well as West Virginia University sports. Leo and Doris enjoyed winters in Naples, Florida for the past 30 years.

Viewing will take place Tuesday December 29, 2020 at 10 am followed by mass at 11:30am at the Saint Vincent de Paul Catholic church in New Martinsville, WV.

Face masks and social distancing will be required.

To send flowers to the family or plant a tree in memory of Leo Mack Herrick, please visit our Heartfelt Sympathies Store.

We encourage you to share your most beloved memories of Leo here, so that the family and other loved ones can always see it. You can upload cherished photographs, or share your favorite stories, and can even comment on those shared by others.

The Shrivers and Mark Chambers sent flowers to the family of Leo Mack Herrick.
Show you care by sending flowers

Posted Dec 31, 2020 at 04:48pm
Leo, and his entire family, have always been the best, They were fun and exciting neighbors to be around. The neighborhood was a fantastic place to live. To know Leo, Doris, and the entire Herrick family, was a blast. Their dog, Shag was loved by everyone.
It was also a fun adventure to go into Leo's Market.
Leo, Doris, and their family were known by everyone, and loved by them as well. Many years of pure fun and laughter, and true joy in knowing Leo and his wonderful family. I know he is laughing with God, as he tells his jokes. We will see him again. You are all in my Prayers and thoughts for comfort and healing. It was always fun to be around Leo Herrick .
Comment Share
Share via:

Posted Dec 29, 2020 at 12:22pm
Dear Herrick family, my sympathies and heartfelt prayers. May God Bless you and yours in the coming days.
Comment Share
Share via:
M

Posted Dec 28, 2020 at 09:42pm
Our deepest sympathy from our family to yours on the loss of your father. The Gehrig Family
Comment Share
Share via:
TS

The Shrivers purchased the Dreams from the Heart Bouquet and planted a memorial tree for the family of Leo Herrick. Send Flowers 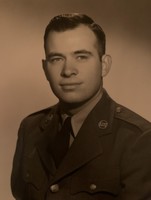