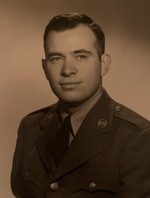 He attended West Virginia University and was a member of Sigma Phi Epsilon in 1948.
Leo was a veteran of the Korean War, where he earned several medals. He is also past president of the New Martinsville Chamber of Commerce, past president of the New Martinsville Rotary Club and past district governor of Rotary International District 7530. Lifetime member of New Martinsville Moose Lodge #931, Sistersville Elks #333 and American Legion Marne Post #28. Leo was also a lifetime member of Saint Vincent de Paul Catholic church, founder and owner of Wayside Furniture, previous owner of Leo Herrick’s Market.

June 13, 1953 he married the love of his life, Doris Anne Fish, a marriage of 67 years.
They raised 1 girl and 4 boys, Melinda (Ron), Matthew (Kimberly), Mitchell (Tracy), Michael, and Christopher (David). In addition, they have 9 grandchildren and 3 great grandchildren.

Leo had a passion for his camp on Slicker Falls in Tyler County, as well as West Virginia University sports. Leo and Doris enjoyed winters in Naples, Florida for the past 30 years.

Viewing will take place Tuesday December 29, 2020 at 10 am followed by mass at 11:30am at the Saint Vincent de Paul Catholic church in New Martinsville, WV.

Face masks and social distancing will be required.