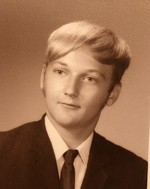 He was a retired coal miner with Quarto No. 4 mine; stock boy for the former Witschey’s Market, avid NASCAR fan, liked racing cars on dirt tracks, enjoyed car shows especially old muscle cars and cooking. He is a graduate of Magnolia High School Class of 1970.

In addition to his parents, he was preceded in death by a brother, James Anderson.

Memorial contributions may be made, in Gary’s name, to the Wetzel County Animal Shelter, 399 Mollahan Dr., New Martinsville, WV 26155.