To share your memory on the wall of Ralph Hall, sign in using one of the following options:

He was a retired crane operator for the former Ormet Corp. In 1960 he joined the Sardis Volunteer Fire Department and later served as the fire chief for twenty-five years. He was a member and elder of the Sardis Church of Christ.

In addition to his parents, he was preceded in death by his wife, Twila Mae Hall.

To send flowers to the family or plant a tree in memory of Ralph Emerson "RE" Hall, please visit our Heartfelt Sympathies Store.

We encourage you to share your most beloved memories of Ralph here, so that the family and other loved ones can always see it. You can upload cherished photographs, or share your favorite stories, and can even comment on those shared by others.

Posted Jan 24, 2021 at 01:29pm
Greg and Doug...we are saddened to have just learned of your dad's journey to be with your mom. may he rest in peace and praying for days of grief to be few but strong.
Dodi and Harold
Comment Share
Share via:
SG

Posted Jan 22, 2021 at 07:31pm
Ralph was a good friend to me.When i first moved into my home across from the church ,he always invited me to come to church there.i loved what he did for the fire department here,and the parades for the carnivals they had.he took very good care of the church yard and parking areas.he will sadly missed by me cause he always had time to talk to me.The saddest thing will be not seeing him on his mower taking care of the church yard. God bless doug and greg and your families.Ralph will alway be in my memories, till the day I die. Sammy Grimes.
Comment Share
Share via:
SD

Posted Jan 22, 2021 at 04:49pm
Your team at Nationwide are thinking of you during this difficult time. Our warmest condolences on your loss.

Posted Jan 21, 2021 at 06:19pm
So sorry to hear of Emerson's passing. A great man and friend, to his sons and families and his sister we send our love and prayers for your comfort during this difficult time. Greg, we appreciate your call and message today. Love and prayers for all that loved and will miss this wonderful man. God bless all. Denny and Barbara DeVore - Homosassa FL
Comment Share
Share via:
LC

Posted Jan 21, 2021 at 05:20pm
Please accept our deepest condolences for your loss. Our thoughts are with you and your family during this difficult time. 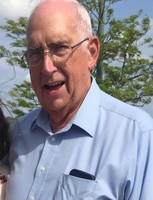