To share your memory on the wall of Robert Anderson, sign in using one of the following options:

Retired equipment operator for the former Ormet Corp, member of the Mannington Lodge #31 A.F. & A.M., a 32nd degree Scottish Rite Mason and a member of Nemesis Shrine in Parkersburg.

To send flowers to the family or plant a tree in memory of Robert Henry "Bob" Anderson, please visit our Heartfelt Sympathies Store.

Rita, Chris and Lakyn Campbell and David Starkey and family sent flowers to the family of Robert Henry "Bob" Anderson.
Show you care by sending flowers

Posted Jan 26, 2021 at 07:15pm
Debbie, our thoughts and prayers are with you and your family. May Gods loving grace give you a peace and comfort in the days ahead.

Posted Jan 26, 2021 at 04:39pm
Bob was such a good hearted person. His thoughtful visits with Mom, often with gifts of his “homegrown tomatoes, made her last years so much brighter. I will never forget him.
Comment Share
Share via:
DH

Posted Jan 26, 2021 at 08:24am
Sorry to learn of Bob’s passing. I first got to know Bob at the Ellsworth school in Middlebourne during the 40’s. Though Bob moved on we enjoyed the numerous times ( WalMart, McDonalds, TCHS alumni parade, doctor offices ) our paths crossed during the next 70+ years allowing us to keep abreast of our common interests. He will be missed!!
Comment Share
Share via:
DF 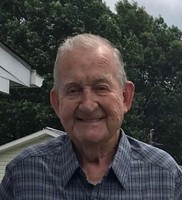