To share your memory on the wall of Carter Wessel, sign in using one of the following options:

Carter was born Monday, March 29, 2021 in Marietta, OH; he was the son of Steven Wessel and Kimberly Harman.

Carter was born Monday, March 29, 2021 in Marietta, OH; he was the son of Steven Wessel and Kimberly Harman.

Preceding him in death are maternal grandfathers, Danny Booher and David Schwendeman.

Memorial contributions may be made, in Carter’s name, to the Zachary Taylor Trust, 1224 S Bridge Street, New Martinsville, WV 26155 or stop by any WesBanco Bank. This fund is used to erase the cost of funerals for mommies and daddies.
Read Less

There are no events scheduled. You can still show your support by sending flowers directly to the family, or planting a memorial tree in memory of Carter James Wessel.
Plant a Tree

We encourage you to share your most beloved memories of Carter here, so that the family and other loved ones can always see it. You can upload cherished photographs, or share your favorite stories, and can even comment on those shared by others.

Plant a Tree in Memory of Carter
Plant a tree 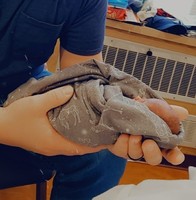