To share your memory on the wall of Wilma Glendenning, sign in using one of the following options:

Print
Wilma L. Glendenning, 76, of Sistersville, WV died Sunday, May 9, 2021 while at Stonerise in Belmont, WV.

Wilma was born August 30, 1944 in Beallsville, OH; daughter of the late Clarence and Hazel (Whipple) Hudson.

Wilma was born August 30, 1944 in Beallsville, OH; daughter of the late Clarence and Hazel (Whipple) Hudson.

She was a homemaker, enjoyed sewing and listening to books on tapes and she attended the Paden City Church of the Nazarene.

In addition to her parents, she was preceded in death by her two husbands, Ralph Vanness and Glen Robert Glendenning; son, Randy Vanness; sister, Dora May Decker and brother, Clyde Hudson.

To send flowers to the family or plant a tree in memory of Wilma Louise Glendenning (Hudson), please visit our Heartfelt Sympathies Store.

We encourage you to share your most beloved memories of Wilma here, so that the family and other loved ones can always see it. You can upload cherished photographs, or share your favorite stories, and can even comment on those shared by others. 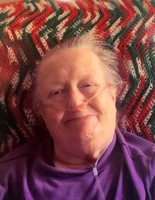