To share your memory on the wall of Joan Turner, sign in using one of the following options:

Joan was a beloved wife, mother, grandmother, and friend, and she loved reading, watching sports, and cheering on the Herd and the Crimson Tide.

She was preceded in death by her grandparents, Thomas and Delphia Postlethwait, her parents, Noel and Wanda Frye, and her husband, Boyce Donald “Don” Turner.

Surviving are her daughters, Donna and Camille Turner, and her grandchildren, Corey, Nicholas, and Ryan Miller, and Alex and Ana Kazanjian.

At Joan’s request private graveside services were held on Thursday, May 20, 2021 at Greenlawn Memorial Park in New Martinsville. Local arrangements entrusted to the Jarvis-Williams Funeral Home.

The family would like to express gratitude to Ohio Health Hospice.

To send flowers to the family or plant a tree in memory of Joan Frances Turner, please visit our Heartfelt Sympathies Store.

We encourage you to share your most beloved memories of Joan here, so that the family and other loved ones can always see it. You can upload cherished photographs, or share your favorite stories, and can even comment on those shared by others. 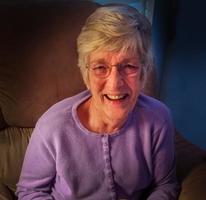