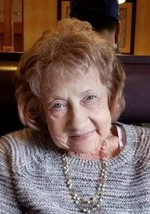 Raised in the Mormon Church, later in life she attended the First Christian Church in Woodsfield, OH. Enjoyed having her children and grandchildren home at any time - always making sure no one went home hungry. She was an aid/caregiver, loved playing BINGO and baking, was Past President of the Ladies Auxiliary New Martinsville Post 86