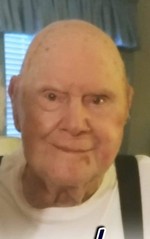 Shelby Richard Bailey, 93, of Paden City, WV passed away peacefully at home surrounded by his family on April 17, 2022.

He was preceded in death by his daughter, Patti Bailey Gallo. He was the last surviving of his fourteen siblings.

He is retired from Mobay/Bayer with thirty-seven years of service, an honorably discharged veteran from the United States Army with the Rank of Master Sgt. and served in the Korean War. Shelby had a deep love for the Word of God and spent time each day reading his Bible that he always kept close to him. He loved spending time at his farm on Middle Island Creek riding his Kubota and visiting with the neighbors. He enjoyed listening to gospel and bluegrass music and his favorite hymn was Shall We Gather by the River.

Friends received 2-4 and 6-8 p.m., Wednesday, April 20, 2022 at the Jarvis-Williams Funeral Home in Paden City, where funeral service will be held 2 p.m., Thursday, April 21, 2022. Burial to follow in Greenlawn Memorial Park in New Martinsville.