To share your memory on the wall of J. Michael Barnes, sign in using one of the following options:

Provide comfort for the family by sending flowers or planting a tree in memory of J. Michael Barnes

Provide comfort for the family of J. Michael Barnes with a meaningful gesture of sympathy.

A graduate of Magnolia High School, he served as class president, and was a member of the baseball, track and basketball teams in addition to being a member of the 1964 championship football team. He completed his undergraduate degree at WVU and received his DVM at The Ohio State University School of Veterinary Medicine.

He was a beloved veterinarian to many furry friends at the Riverside Animal Clinic, which he opened in June of 1977. He was a long time member of the local Rotary Chapter and the Brooks Bird Club. He enjoyed being outdoors: going on hikes (which would not always be the promised loops), fishing trips (which were more about being outside than actually catching fish), bike rides (which weren’t always fast) or sitting outside for happy hour with his special cat “Six”. He especially enjoyed walks on the beach at Emerald Isle, NC which he was recently able to visit with his family. Spending time with Ben and Evie, especially teaching them the fine arts of teasing, cookie eating, and flatulence were also activities he savored. Most Wednesday evenings Mike and Jeanne could be found enjoying the weekly wine tasting and many other evenings during Happy Hour at Baristas with a loyal crowd of friends.

A private graveside service was held for close family and friends at the family cabin on August 21st. A celebration of life will be held in the garden of Barista’s on Saturday, Sept. 14th from 1-4 pm.

We encourage you to share your most beloved memories of J. Michael here, so that the family and other loved ones can always see it. You can upload cherished photographs, or share your favorite stories, and can even comment on those shared by others.

Posted Sep 02, 2019 at 02:44pm
We will miss Mike's good humor and his great smile.
With deepest sympathies, from Maurice and Eva Currey
Comment Share
Share via:

Posted Aug 30, 2019 at 04:42pm
Mike was always a very interesting and exciting person to be around. He took care of your animal problem, and had a wonderful adventure with you during the process.
Simply, a great man to be around, either in his office, or anytime around town. He always took the time to listen, and share a great story.
Dr. Mike, you lived a wonderful life. You were Blessed, and Blessed everyone with your knowledge and care for animals, and humans. I know you are on the team in Heaven, taking care of all critters.Thank you for all the years. David Hahn
Comment Share
Share via:

Posted Aug 29, 2019 at 11:10am
Dr. Barnes took care of our pets from the time he opened his clinic until he retired. He was a great vet and a super person. My thoughts and prayers are with the family.
Comment Share
Share via:
GH

Posted Aug 29, 2019 at 10:03am
I was so sorry to hear about Mike's passing. His parents and mine were very good friends. We grew up together, and played baseball and football together. He was truly a special person.
Comment Share
Share via:
LG

Posted Aug 27, 2019 at 06:50pm
I'm so sorry for your loss. Mike was a wonderful person. He was the biggest encourager of my love for animals. Our prayers are with you all. 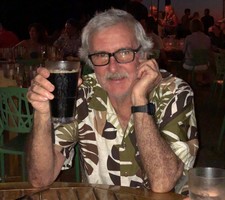