To share your memory on the wall of John Mayfield, sign in using one of the following options:

He was a retired employee for Corning Glass Works starting in Paden City and finishing in Charlerol, PA having worked as quality control, shift supervisor, accounting and engineering technician; member of the Roscoe Gun Club and he volunteered once a week for many years at the St. Vincent de Paul Catholic Charity Store.

In addition to his parents, he was preceded in death by his wife, Shirley Mayfield (2016).

Burial at the convenience of the family in Greenlawn Memorial Park in New Martinsville, WV.

We encourage you to share your most beloved memories of John here, so that the family and other loved ones can always see it. You can upload cherished photographs, or share your favorite stories, and can even comment on those shared by others.

Posted Jan 10, 2020 at 09:27pm
Johnny—-So sorry to hear of the passing of your dad. I’ve seen him in recent years at an auction or two. He was always so nice. Take care. Love Steve and Toni
Comment Share
Share via:
DM

Debra Beckett and Heather May

Posted Dec 20, 2019 at 11:02am
May you find peace in the memories and love that surrounds you. Heartfelt condolences.

Debra Beckett and Heather May purchased flowers and planted a memorial tree for the family of John Mayfield.

Just wanted to extend my sympathy in the loss of your dad. I worked with both your dad and Johnny Boy at Corning in Charleroi.
Your dad was a very nice man and always treated me with respect and kindness. i enjoyed both knowing and working with him. God bless and comfort you during this time.
sincerely, Lois A. Thomas, Monessen, Pa. 15062
Comment Share
Share via:
GD

Ginny, Kenny and Marty Dunn purchased flowers for the family of John Mayfield. 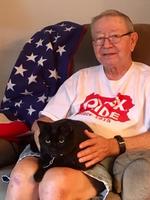