To share your memory on the wall of Carolyn Gatian, sign in using one of the following options:

Print
Carolyn Ruth Gatian, 48, of Paden City, WV met with her Savior on Tuesday, October 22, 2019 while doing what she loved.

Carolyn was born May 11, 1971 in New Martinsville, WV; daughter of the late Kenneth L. and Eleanor R. (Brookover) Lem... Read More
Carolyn Ruth Gatian, 48, of Paden City, WV met with her Savior on Tuesday, October 22, 2019 while doing what she loved.

Carolyn was born May 11, 1971 in New Martinsville, WV; daughter of the late Kenneth L. and Eleanor R. (Brookover) Lemasters.

She was a Franchise Trainer for Dominos, a member and officer of New Martinsville Moose Chapter 2165, she enjoyed GEO Cache, Goodwill shopping, traveling, laying on the beach, attending WVU games with her husband Robert and spending time with her grandchildren and a member of First Presbyterian Church in Sistersville.

In addition to her parents, she was preceded in death by her brother, Mark Lemasters and step-son, Robert Gatian, II.

To send flowers to the family or plant a tree in memory of Carolyn Ruth Gatian (Lemasters), please visit our Heartfelt Sympathies Store.

We encourage you to share your most beloved memories of Carolyn here, so that the family and other loved ones can always see it. You can upload cherished photographs, or share your favorite stories, and can even comment on those shared by others.

Janet & Marion Parsons Rick & Alice Sypolt, Mike and crew, and other have sent flowers to the family of Carolyn Ruth Gatian (Lemasters).
Show you care by sending flowers

Posted Oct 28, 2019 at 11:54am
Sheri and Waylon, I am sorry for another loss in your family. It was heartbreaking to hear. Carolyn was a wonderful person. She will be missed.
Comment Share
Share via:

Posted Oct 26, 2019 at 11:47am
Robert, I am so sorry to learn of your loss. Although I didn't know your wife personally I have heard good things about her. Keeping you in my thoughts and prayers!
Comment Share
Share via:
JS

Posted Oct 26, 2019 at 02:40am
Our greatest condolences to your family and friends for their loss. You will be missed from your Domino's family in west liberty.

Mike and crew purchased flowers for the family of Carolyn Gatian. Send Flowers

Posted Oct 25, 2019 at 10:00pm
To our amazing dominos mentor thank you for keeping us on our toes you will be greatly missed 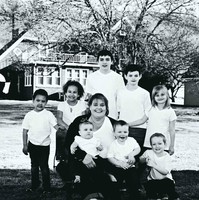